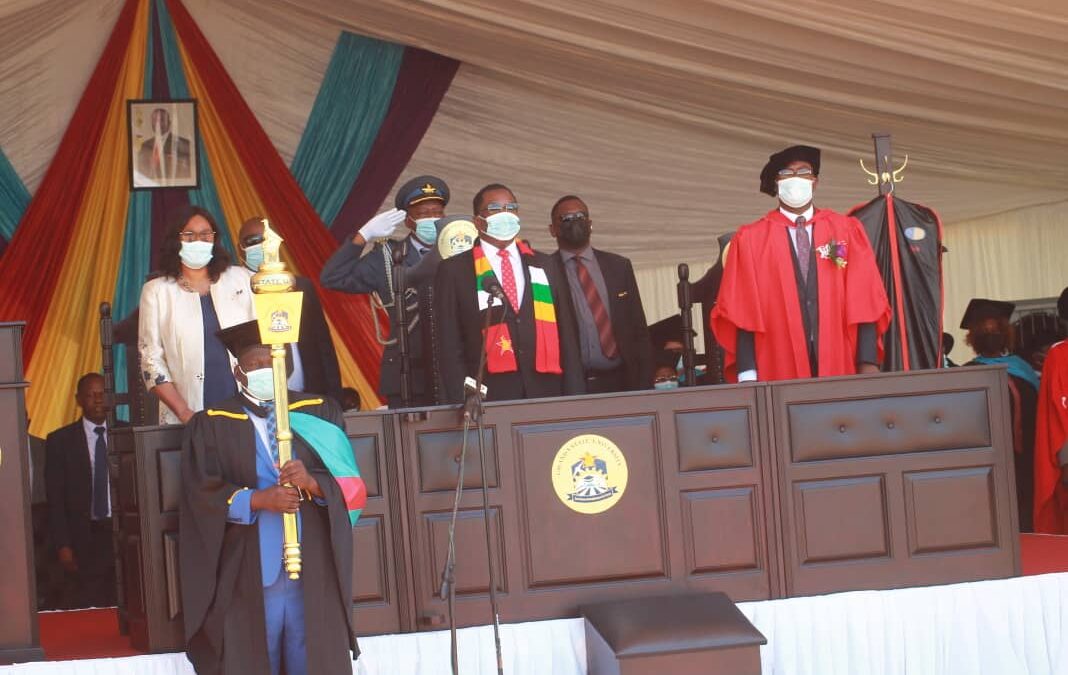 GWANDA State University witnessed two memorable events on the 18th of November 2022 — the installation of
President Mnangagwa as its first Chancellor and the capping of 15 pioneer students at the institution’s
inaugural graduation ceremony.
The graduation ceremony for the newest university was held at GSU Epoch Mine Campus, in Insiza,
Matabeleland South.
The university was conceptualised in 2012 before it started operating in 2015 as a university college
under the National University of Science and Technology (NUST.) The university was established in
2016 through an Act of Parliament and was mandated to specialise in veterinary sciences, irrigation
engineering and management and mining engineering, environmental engineering and ecosystems
restoration in line with its location in Matabeleland South.
While the university is operating from the disused Epoch Mine, it has land in Gwanda Town where its
main campus will be established. Yesterday, was a day of celebration in Matabeleland South with the
university graduating its first group of students.
Graduands and guests observed as President Mnangagwa was garbed with the GSU gown before
presiding over the graduation ceremony.
Professor Doreen Zandile Moyo was installed as the university’s Vice-Chancellor.
It was a celebratory day for a culturally diverse Matabeleland South as poets, Imbube ensemble
groups and traditional amabhiza dancers entertained the guests.
President Mnangagwa said it was historic for Matabeleland South to have a university in its backyard.
He paid tribute to late national heroes, Vice President John Landa Nkomo and Professor Phineas
Makhurane as well as Zanu PF Women’s League deputy secretary and former Minister Angelina
Masuku for their role towards the establishment of the university.
President Mnangagwa said values and principles of innovation, integrity, innovativeness, and
excellence among others should guide the new university.
“The establishment of GSU is the culmination of a bold policy of having at least one State university
in each of the country’s 10 provinces. This is echoed by our quest to realise development that leaves
no one and no place behind. it is also an acknowledgement that education is a right that should be
accessed by our citizenry, no matter where one lives,” said President Mnangagwa. He said it was now
up to the community to ensure their children are enrolled at the university.
“Yekelani abantwana bezofunda lapha,” said the President, adding that the province should now
strengthen the teaching of subjects, construct laboratories and relevant facilities that will see students
advance in science, technology and innovation-related fields.
“Under the Second Republic, those with talent are being rewarded and supported. I, therefore,
challenge young people in Matabeleland South province and the nation as a whole to dream big and
realise their full potential,” he said.
President Mnangagwa said his Government supports the growth of higher and tertiary institutions as
the institutions are key to national development.
“It is noteworthy that the university has developed key infrastructure in a short space of time through
ingenuity, prudent and timely use of available financial resources. Well done. Your efforts led to the
phenomenon transformation of this campus. Going forward, the student population growth must

always be in tandem with infrastructure development at all our institutions of higher learning,” said
President Mnangagwa.
“To this end, the Second Republic is determined to grow the higher and tertiary education sector as
the bedrock for scientific, technological and innovation-driven modernisation and industrialisation in
our country.”
He said through heritage-based Education 5.0 the country will leap-frog towards development.&quot;
President Mnangagwa said the continent is now benefiting from Zimbabwe’s skills development.
“To this end, this week, I was pleased to send off a team of specialist doctors to participate under the
‘Love without Reason Cleft Lip and Palate Surgical Camp’ in Kisumu, Kenya. As a nation, we are
proud that our education and health delivery systems have trained skilled doctors of high calibre who
also care about humanity to a level where they undertake philanthropic missions to sister republics on
the continent of Africa. Such patriotic and pan-African attitudes should be emulated not only by
others in the medical profession but across all professions,” he said.
President Mnangagwa challenged universities including GSU to come up with strategies that enable
institutions to become specialist centres.
He called on GSU to coordinate partnerships in the agriculture and mining sector to produce cutting-
edge breakthroughs for the country.
“The domestication of mining sector value chains through value addition and beneficiation must see
the university registering its footprint in this respect, Focus must also be on providing graduates and
academics with appropriate ecosystems to develop relevant technologies that meet the unique realities
of the institution’s mandate area. The collaboration between GSU and the Russian State Geological
and Mining University is a commendable initiative,” said President Mnangagwa.
Meanwhile, GSU Vice Chancellor Prof Moyo said 15 students were graduating from the institution
since it became a standalone institution.
“Today, the first cohort of 15 GSU graduates from the Faculty of Natural Resources Management and
Agriculture will be graduating with degrees in Crop Science and Animal Science. Of these nine,
which translates to 60 percent, are females while six which translates to 40 percent are males. The last
group of engineering students under the GSU and Nust collaboration graduated last week at Nust. To
date, GSU has graduated 123 students under Nust,” said Prof Moyo.
She said the university has a 442-student population while its staff is advancing in academic
qualification with seven of them attaining post-doctorate degrees this year.
Two best graduating students Qhelani Nyoni and Sandra Masuku walked away with the Emmerson
Dambudzo Mnangagwa Chancellor’s Award and were gifted with US$1000.
Prof Moyo said the university is committed to implementing National Development Strategy 1 which
is a step towards the attainment of vision 2030.
Prof Moyo said several development projects have been lined up at the institution
She said the construction of the Gwanda Campus will start next year.
“To date, 25 student blocks that accommodate 500 students and 15 housing units blocks that
accommodate 60 families have been renovated. I’m pleased to let you know that these refurbishments
have enabled the university to accommodate all its students and staff at the Epoch Mine Campus.
Renovations of the remaining buildings will be completed in the coming year and will accommodate a
further 100 students and 20 families.